Baby Dolls, now known as Babe’s, Babe’s Cabaret and Adult Boutique, as well as Babe’s Totally Nude Gentlemen’s Club, is a small, out of the way strip club in Las Vegas. While the outside of the building seems lavish and dominant, the club is rather bargain basement, and usually either comes near the bottom of club review lists or is not even mentioned at all.

Like most clubs in Vegas, Babe’s Cabaret has a cover charge but two non-alcoholic drink tickets are issued in return. Alcohol is not legal in all-nude clubs, thus the reason for non-alcoholic tickets. Also, because of the no-liquor rule, the admission is eighteen years of age rather than twenty-one. 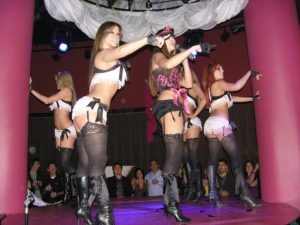 To keep the customers coming, the club offers special nights. Mondays are Military Night and anyone with a valid military ID receives free admission. On Tuesdays, the two-for-one lap dance is available from three in the afternoon until midnight. Thursday nights are for the locals as they get in free, otherwise they pay half price on the cover the rest of the week.

Prices for dances appear to be much cheaper than other clubs but many say the caliber of the dancing is very poor. In addition to the complaints about the dance moves, many previous patrons have indicated that the girls are too pushy and the customers feel like the place is more a “shakedown” than a strip club. For those readers not sure of the word shakedown, it is a slang term for extorting money. Apparently in the context of this strip club, most guys complained that when ordering VIP treatment and once alone with the girls, they were “harassed” for more money.

The club is very basic with free parking, no valet service, no bottle service, no reservations, a loose dress code (although they do not permit ripped jeans, hats, jerseys or sneakers), VIP area, and private rooms. Everyone seems content with the music which is a combination of hip hop and alternative. Interestingly, most reviews found on different forums were either mediocre or downright bad.

But those who talk positively about the club identify three common features that keep them going back:

In case you do not know what “hookah” is, it is a way of smoking tobacco. Those of you who watch old black and white movies will remember the stars of the movies going into dens in India where the locals would smoke from fancy glass bottles with long hoses. Apparently this tobacco comes in a wide selection of flavors, and staff at Babe’s is quite knowledgeable, even enthusiastic, when helping customers in the hookah lounge.

Lastly, the Wednesday amateur nights are popular since many guys say the amateur girls are better than the regular strippers. The truth is there is a real incentive for the female participants, as the prizes are significant. First place gets four hundred dollars, second place receives two hundred dollars, and third place still gets a whopping one hundred dollars!